B is for Blackbirds

The second in my look back at 2020’s friends are the blackbirds.

Why? Because they broke my heart at the beginning of the story and filled me with joy watching new beginnings.

Back in March the world was in turmoil. I thought I was dealing with everything quite well until I heard a thud against my office window. I ran outside and found a lifeless lady blackbird. I hoped she may just be stunned, but I knew in my heart she’d gone. Regardless, I picked her up gently, wrapped her loosely in a towel and placed her in a warm cardboard box.

An hour later, I knew when I opened the box there would be no change, and there wasn’t. Her tiny body not moving.

So I took her gently out of the box and sat on the kitchen floor holding her. I couldn’t hold back the tears though, which felt like they would never stop flowing.

I’m still getting emotional writing this now. I must have sat with her, stroking her for a good half hour, I felt like I’d cried an ocean of tears, telling her how sorry I was and how much I loved her.

I then took her back outside, laid her softly in the deep lush green grass and picked a flower to lay by her. I also put a celestine crystal with her.

I contacted my animal communication tutor and she told me that the blackbird had chosen her passing and that she would have been grateful to have been treated with such respect and love.

I call her, “beautiful girl” and connect in with her via the photograph I took of her peaceful body in the grass. She makes me aware that her neck broke and there was nothing I could have done. In fact she had already left her body before the impact.

She gives me, “four and twenty blackbirds,” from the nursery ryhme, and then shows me the meaning behind this f0r her. “Four and twenty is 24, which in numerology 2+4 = 6.”

She then goes on to explain that there were 6 blackbirds in total who she gave her body up for in order to allow these to come through in her place.

She makes me aware that the feeling of weight holding her down by her ankles has lifted and she is soaring above the ocean like a seagull.

I thank her so much for allowing me to connect with her again.

Thankfully, the story of the Blackbirds didn’t end with her passing

As spring unfolded its wings, the blackbirds became very busy flying to and fro with mouths full of insects. Which could mean only one thing – baby blackbirds!!!

Sure enough, very soon, came 2 little bundles of joy, chirping and flapping at their parents to be fed.

Bathtime was immense fun to watch, and the fierce little ones didn’t like being interrupted mid-splash and would make it clear in no uncertain terms to the rude Starlings that it wasn’t their turn yet!

They were so brave, often letting me near them whilst just watching. One day I’d left my gardening jumper outside on the bench. I looked out of my window to see one of the bubs making themselves quite cosy in it, the sweetest thing!

Another time, I looked out of the window and saw one of them laying on the ground, not moving, their eyes closed and wings spread. I panicked and rushed outside only for them to open their eyes, look at me with their head on a tilt, before getting up and flying off. I don’t think they were impressed at having their sunbathing interrupted!

A lesson for us born-worriers, not to always expect the worst. 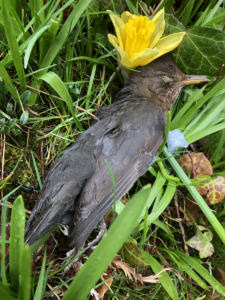 A is for Animals healing each other

D is for Dog Daisies
Scroll to top