The past couple of months have been a buzzard bonanza for me. There was the time back in March I ended up somewhere I didn’t know where, with 4 buzzards soaring above, being invited by one to join them in the skies.

Then there were the two buzzards I saw whilst out walking and they flew overhead. On a local walk a couple of weeks ago I came across some buzzard feathers on the ground whilst another circled overhead. Not to mention the buzzard who was flying above my house who the rooks were trying to guide away. THEN I went for a random walk over the moors on a new path. I was sat drawing the landscape and a buzzard was flying at my eye level! THEN yesterday I was out for a walk somewhere else and once again noticed a buzzard in the skies above. Then another, then ANOTHER! OK. They’re trying to tell me something.

I’m listening. I can almost hear them rolling their eyes it’s taken me so long. But you know, I am in such awe of animals that I find it hard to listen. Perhaps that’s the main message – we’re all level with each other. Just as I’m typing this, a Yellowhammer lands in the tree in front of me and is watching me.

It’s funny because I’ve started reading “The Artist’s Way,” by Julia Cameron. Part of the process involves looking at past comments that impacted you creatively. One of mine involved being called, “too sensitive,” and that I would, “run away with things,” and that I needed to PROVE myself or things I had seen. It turns out through research that I’m one of the 15-20% of the population classed as “Highly Sensitive People.” I know the people who are reading this who AREN’T, won’t understand, but I know that those who are WILL. And both are ok. I now know it isn’t a “character” flaw, but a personality type, I can embrace my sensitivity as a power.

I digress, but the point I was going to make was that I felt the urge to take a photo on my phone of the yellowhammer to prove what I’ve said is true. Despite just enjoying our encounter, I felt pressure to get evidence. But even if I had, the 80-85% would doubt it and find other explanations to reason away what I have said. Being “too sensitive,” and having to “prove” yourself is a powerful combination to having low self-esteem.

So I’ve wandered off down a rabbit hole here, but the Buzzard’s message was all about freedom, purification and a new vision – about going through a process of purification. The higher it flies, the easier it becomes to fly. So that is the message, just don’t ask me to prove it.

My portrait of one of the beautiful buzzards who reminded me of my freedom, and that the higher I fly, the easier it will become 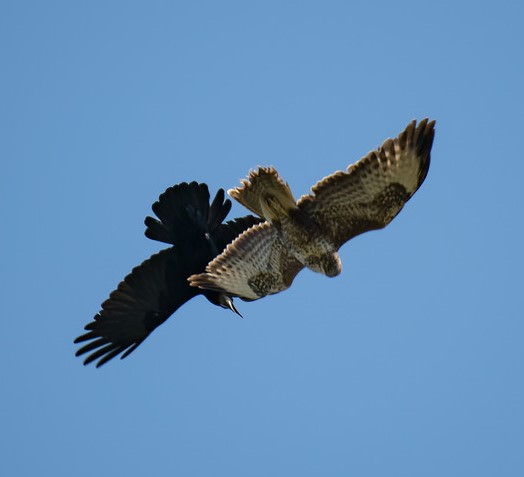 The rook and the buzzard in the sky directly above my house. Their message was that I would face adversity in order to obtain my freedom.